I ordered this pack of patterned paper ages ago and finally decided to bring it out. On Amazon, you can find this shop called Jong Ie Nara who sell lots of origami-related things. This one I have is a collection of 40 papers with 20 different designs. They are also double-sided.

I took a liking to the pattern with the flowers all over it and, in timing with Mother’s Day next weekend, I decided to make a bouquet. Longtime followers will know that I am no stranger to bouquets, as seen in my first kusudama bouquet and in my rose bouquet.

Now, I usually cut my 15cm squares into 7.5cm squares. This meant that I would have eight squares in every colour since there were two sheets of each pattern. So this time, my kusudama flowers will be made of four petals instead of five.

The centres of these flowers were much smaller than usual. When attaching the stems, I simply made a small loop at the end and put hot glue on it before passing them through the flowers.

Then I hot glued small white buttons over the centres. Buttons are so multi-purpose!

Then came the floral taping of the stems. It was at this point that I had realised how large the stems were. Oh well, it might look better in a vase with a tall neck. Also I had to redo the wrapping at one point because it started up too high. Make sure it’s not visible!

At this point, I had a ribbon dilemma and went out to buy lots of ribbons. In the end, I settled on a light blue ribbon to wrap the base with. I had accidentally made this one a little short, but sometimes small bows are fine. And that meant that it could sit nicely in a vase. 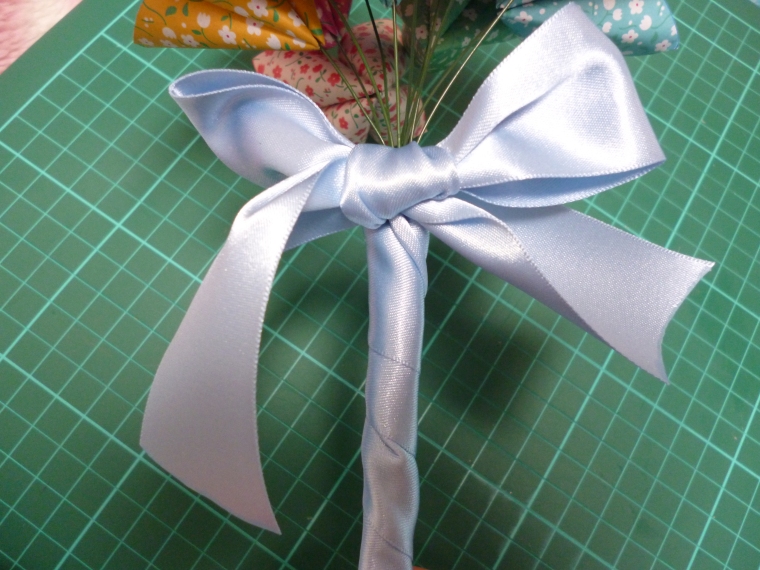 I’m actually making multiple bouquets, so stay tuned this week! I’ll be exploring different colour schemes mainly and I might try a different kind of flower too.