Often called the “earth rainbow”, Banded Agate is a healing stone for body, mind and spirit. It can increase concentration, honesty and memory. Banded Agate also protects the wearer from psychic attack, thereby preventing negative energy from harming you.

Agate is formed with bands of microscopic quartz crystals. It is both a grounding and a spiritual stone, allowing for one to bring their spiritual experiences into their everyday reality. Agate is believed to improve mental functions and can help where issues of clarity and stability are concerned. Agate is also helpful in overcoming negative emotions by bringing love into the chakras. Although they work very slowly and deliberately, this gentle nature of Agate helps it to have a lasting impact. (From healingcrystals.com)

This stone is golden brown and yellow in colour. A frame of brass and citrine crystals compliment it well. This one has some nice lines going through one side of the stone, with patches of brown. I was temped to give it a chocolate-related name, but a tiger eye pendant that I made ages ago already holds that title, haha. 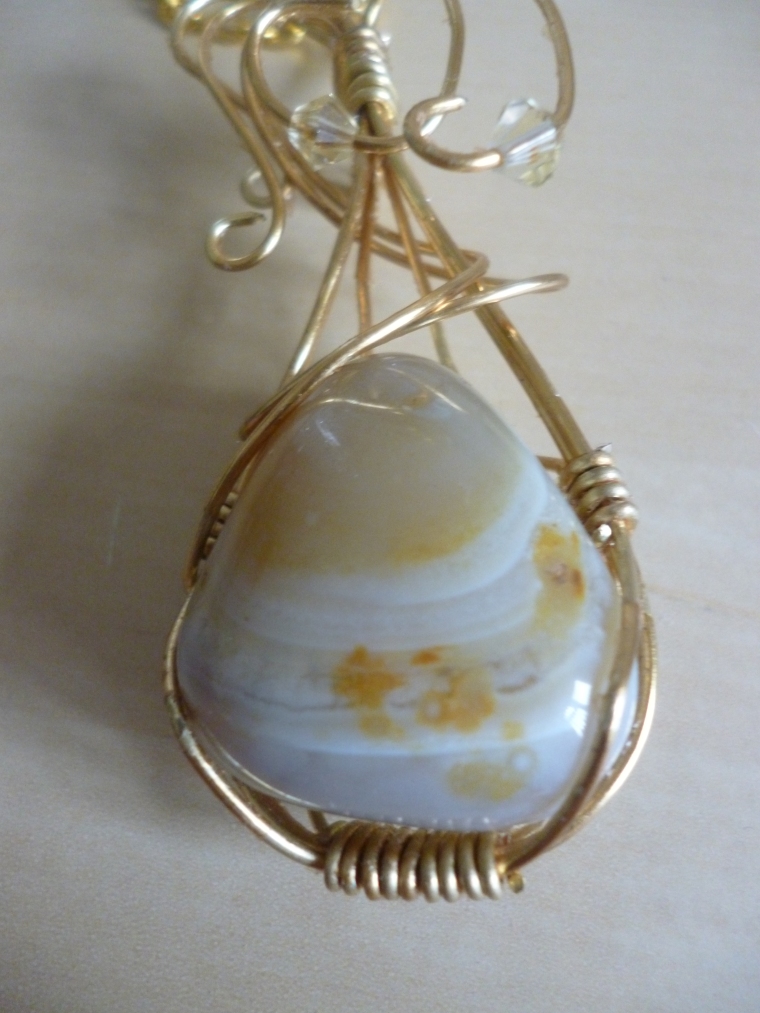 A fairly different style was adopted for this stone. I made the frame tall and attempted to obstruct the stone as little as possible. The stone had a more regular shape, so it was easier to keep it in place. I also added a little weave at the top of the pendant, where the chain sits. It’s a bit of an amateur job though, I think can do better next time.

I did cut longer lengths of wire for the purpose of wrapping this stone, however it somehow still wasn’t enough to do what I wanted. So sadly, the curls on this frame weren’t as nice as I had hoped, but I managed with what was left.

This post should have been up a few days ago, but I was busy moving my belongings around as my tenancy for my previous house was ending.